Write and Perform a Punk Song 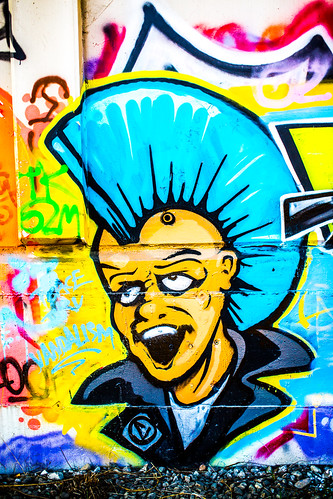 You might associate punk music with loud guitars and pointy haircuts, but this is only one aspect since punk's first appearance long time ago. At that point in time, these were musical features that set this new genre apart from the mainstream industry that had a disproportionate focus on smooth looks and sounds (think The Beatles etc). It was not even that punks detested this superficiality, it was mostly the hypocrisy and glorification of ‘genius’ pop stars that they protested against. Even Punk cannot escape the claws of hypocrisy always - however when it stays true to its original inspiration, it is always: 1) simple, clear and honest 2) energetic 3) for everybody by everybody.

Punk's attempt at cutting through cultural dogma can be seen as very rough-edged, it can often be perceived to use insults and lyrical aggression to convey its message. However, it does not do this just for the sake of it. The playing field of cultural oppression that it has been trying to break down and level is so severe that this is seen to be the only way to create the initial shock needed, so as to have any chance at succeeding.

In this sense, Punk is more of an attitude than a music genre. This is important to remember. As time has passed, many people have tried to encapsulate and use many of the musical features described above, both in the mainstream and other ‘sub-cultures’ (to varying degrees of success). Sometimes it has even been used by those that Punk stands against, being turned into perverted hybrids. Have you ever heard of racist-punk? What an oxymoron, you’d think - using punk, which initially fought against cultural dogma, as a way to fight for cultural dogma! Because of this, some have claimed that punk is dead. This is not true!

Individual or group of 3 maximum / Experiential

1 hour to write. All should perform, length depending on how many there are in the overall group, but a good punk song lasts no more than 3 minutes.

Punk rock bands can consist of any number and any kind of (non)musicians, but for the classical punk rock sense here follows a description how to build your own acoustic power trio, cheap and quick.

Submit the written lyrics of your song. Optional: upload an audio recording of the song to YouTube (or some other video-sharing website and submit the link in Moodle. Instructions on how to upload photos and how to submit things in Moodle can be found here: Instructions on Submission&Uploading