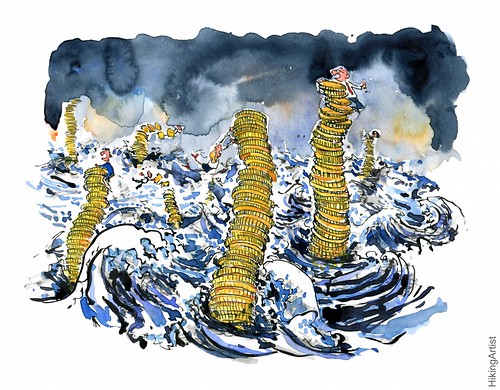 Finance and ethics - is it even possible to put them in the same sentence or is “wall street ethics” too big of an oxymoron? According to a study in May, 2015, almost “half of those surveyed said it was likely their competitors engaged in illegal or unethical behavior to gain a business edge, and close to 20 percent felt it was sometimes necessary for people in their profession to engage in illegal or unethical activities "to succeed.”

This activity allows the youth to experience the dynamics of Wall Street and to play different roles that make them reflect on the motives and methods of transnational corporations and the way they function.

NOTE 2: Time is of the essence! The facilitator can set up a time limit for solving each problem (i.e. 10 min). If you want to, you can run a second round of problems.

As the president of the multinational company you never have a clear opinion on the solution of the problem and always prefer to listen to others' reasons before saying your own. One minute before the meeting starts, a close collaborator tells you that one member of the board is a spy of a competing company. You don’t know who she/he might be, but you know she/he will often mention social issues. You obviously have to pay attention to the spy's suggestions because she/he will try to make your enterprise collapse.

As councilor 1, you are a spy of a competing multinational company. Your task is to convince the other members of the board of directors to take decisions contrary to the ones you believe are right to make the enterprise succeed.

As a councilor 2, you just got in on the board of directors of this multinational company and you want to establish good relationship with the president. You will try to convince the president of your opinion but never contradicting her/him and always flattering her/him. Still, you want your reasons to prevail because you know the president likes firm people. A close friend told you the president seems to be sensitive to social problems, so you have to include in your speeches social issues such as "President, think of the social repercussions" or "President, what will the society say?"

As a councilor 3, it's been ten years since you have been a member of the board of directors and you find yourself on strained terms with the president. In a month, there will be the elections of the new president and you do not want to fail in getting that role as was the case four years ago. You will do anything to discredit the president and to make your decisions be approved especially if contradicting the president's. By discrediting her/him, you will always insist on her/his irresolution and on her/his inability to come to a quick decision. You will oppose while the other councillors will always agree with her/him.

The production costs of your factory in Haiti rose by 10% because of the increase in salaries and of the adjustments to laws which regulate workers safety at work. Digifoot, a competing company, has just opened a factory in China where salaries are lower and trade unions are weaker. In this way, their shoes cost 15% less than yours.

Your factory in Texas is losing 15% annually and your experts suggest that you should sell it.

800 workers who used to be employed in one of your factories in Mexico sued you for damages claiming that you were using a solvent glue which caused their permanent sterility.

Greenpeace has discovered that you use an element that causes cancer to produce one model of your shoes. For this reason, Greenpeace activists chained themselves to the gates of your central office in London.

You bought 70% of Benzinai, a Nigerian petroleum company. Many of its oil-wells are located in the middle of the Nigerian virgin rainforest.

Amnesty International accuses a Vietnamese factory which produces laces for your shoes: bad salaries, corporal punishments, prohibition of using the bathroom more than once a day.

You have the possibility to contract the most famous football player Bobaldo for an advertising campaign ($20.000.000).

NOTE: other problems, more related to the module topics can be created and distributed for the role playing game.

Submit a word piece (up to 200 words) on your experience from doing this activity. Base it on the questions in the Reflection section. Instructions on how to upload photos and how to submit things in Moodle can be found here: Instructions on Submission&Uploading