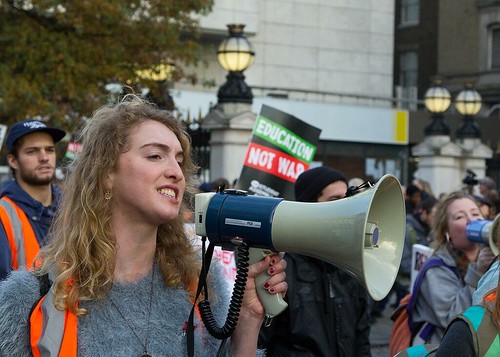 You are young, burning for change and a better world...But you feel that your cries often fall on deaf ears when it comes to big-scale institutions or governments. How can you bring about the long-awaited change then? Oftentimes, it is all about the tools we use. While petitions and project proposals in municipalities are still valid forms of interaction with local/national authorities, there is a growing need to go beyond them and explore more creative means of communication with politicians and other relevant stakeholders.

For instance, the people of South Africa have been using toyi toyi dancing as a political dance during protests - stomping feet and chanting (political) slogans to voice their discontent with the government and push for change. Protests don’t have to be all angst and anger, it can actually be fun and silliness to make a statement. To take one example, CIRCA (“Clown protesters”) are using humour at demonstrations. The lessons learnt from Occupy Wall Street and the Arab Spring underpin the importance of another form of citizen organising and modern activism online via different social media platforms, such as Facebook, Twitter, MoveOn.org etc. Other more controversial methods range from civil resistance (nonviolent resistance) to nudity as a form of protest, used for instance by the protest group FEMEN while staging protests against sexism, sex tourists, international marriage agencies etc. A less widespread but rather controversial tool has been sex strike. When the women from the Colombian town of Barbacoas went on a sex strike (“the crossed legs movement”) to pressure the men to join them in their lobbying of the government to construct safe roads to their town which was thus far cut-off (and thus unsafe for them), the government finally lent a friendly ear to their plight and started reconstructing the roads.

This activity aims to explore alternative methods of interacting with local authorities and stimulate youth participation in local communities.

Provide answers to the questions under Reflection and upload them in Moodle. Instructions on how to upload photos and how to submit things in Moodle can be found here: Instructions on Submission&Uploading